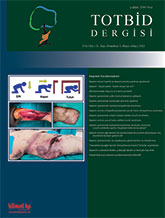 Earthquakes are one of the natural disasters that affect our country the most, and they cause individual and social mental health problems with their devastating effects. Psychological reactions that develop after a trauma such as an earthquake may show different characteristics. After major earthquakes, most of the people are under severe trauma and stress. A significant part of these people are affected mentally and physically, but some of them develop psychiatric disorders. Variables such as the magnitude and duration of the earthquake, being prepared for such an event, personality traits, coping methods, the meaning of the losses experienced, previous experiences, history of mental trauma or psychiatric disorder, social support affect reactions to trauma. Exposure to a trauma such as an earthquake may increase the risk of developing a variety of psychiatric disorders and other medical conditions. Recognition of the risk factors that facilitate the emergence of post-disaster psychiatric disorders is important for determining the people to be prioritized in interventions. In this review, the psychological effects of the earthquake, coping with these effects and psychological support after the earthquake will be discussed.