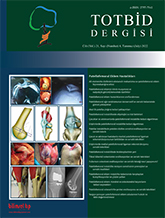 Acute traumatic patellar dislocation consists of 3% of all knee injuries and two-thirds of the cases are under 20 years old. Approximately 50 to 80% of the resisting force against the patellar lateral shifting which is resulted as patellar dislocation is created only by medial patellofemoral ligament (MPFL). Furthermore Weeks et al. described four different patellar dislocation groups in adolescence and childhood in their study and the traumatic group was the most seen type in these groups. In adults tendon autograft is fixed the original place at femur while MPFL reconstruction. But in childhood and adolescence fixation point has close relationship with distal femoral physeal plate. Surgical techniques for MPFL reconstruction may be described shortly in two groups, anatomic and non-anatomic. In anatomic reconstruction the differences between the techniques are just about the patellar fixation techniques of graft. Six different techniques are discussed in this article. Non-anatomic techniques were discussed under two title, adductor sling and fixation on medial collateral ligament. We prefer non-anatomic technique in our surgical reconstruction. Although we usually prefer gracilis tendon as free tendon graft we may prefer semitendinosus tendon as free graft if gracilis tendon does not have enough thickness. Regardless of the used technique the main aim of MPFL reconstruction is to reproduce the balance of patellofemoral articulation.