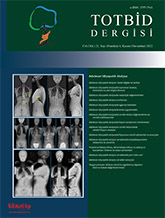 Scoliosis is a three-dimensional deformity of the spine. The degree of the curvature is measured by the Cobb angle method. Cobb angle guides in making a clinical diagnosis, following up the patient and deciding on the treatment modalities. Scoliosis is the most common deformity of the spine. Although there are many causes in its etiology, curvatures that can not be attributed to any cause are called idiopathic scoliosis. Idiopathic scoliosis is the most common form of structural curvatures. According to the age of the patient; it is divided into three subgroups as infantile, juvenile and adolescent. It usually occurs at the thoracic level, less frequently at the thoracolumbar and lumbar levels. The most common curvature pattern is right convex thoracic scoliosis. It is mostly seen in girls. Despite the clinical and experimental studies in the literature, the uncertainty about its pathogenesis still continues. Many developmental, metabolic, biomechanical, neurological, muscular, hormonal and genetic factors have been proposed to explain the pathogenesis. But there has not been any proven and definitely accepted factor in order to explain the pathogenesis yet. After excluding possible etiologies and making a clinical diagnosis of idiopathic scoliosis; it is important to have an opinion about the natural course of the curvature and to reveal the risk of progression at the stage of choosing the most ideal treatment option for the patient.