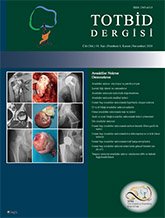 Femoral head avascular necrosis (Femoral head ostenecrosis, FHO); It is a pathological process that progresses with the death of living cells of bone tissue as a result of vascular circulation being disrupted due to various reasons. Although the etiology of osteonecrosis is still uncertain, it is very broad. Alcoholism, excessive steroid use, trauma, sickle cell anemia, are among the common etiological causes. In addition, pathophysiological mechanisms such as fat embolism, increased intraosseous pressure and microfracture of the trabecular bone have been suggested to play a role in the etiology. Treatment of the disease is quite difficult and problematic, since it is difficult to prevent the necrotic process. Patients with osteonecrosis of the femoral head typically have bone marrow fat infiltration and few stem cells. Mesenchymal stem cells (MDGs) are often preferred for many regenerative treatment strategies in orthopedics. One of the treatment options applied in FBO is core decompression and stem cell injection. The purpose of this treatment method is to improve blood flow per femur by reducing intraosseous pressure, to stimulate new bone formation by autologous transfer of stem cells obtained from iliac crest, thereby protecting the joint by reducing or preventing the possibility of joint arthrosis.