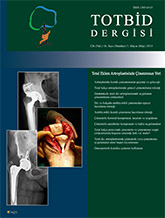 Spacer preparation technique with cement in the knee and hip

The number of knee and hip surgeries are increasing every year; the number of patients undergoing revision surgery because of infection also accompanies this increase. Periprosthetic joint infection can occur early or late. For the treatment of periprosthetic joint infection, two-stage revision surgery is considered as the gold standard. At the first stage, the prosthesis is removed. Then comes irrigation, debridement of nonviable tissues, and filling of space caused by the prosthesis with antibiotic-loaded cement spacer temporarily. Cement spacers can be static or dynamic. Various pre-formed cement spacers are available on the market, but custom-made ones are often preferred by the surgeons because pre-formed spacers contain only certain kinds of antibiotics with insufficient doses. At the second stage before permanent prosthesis is placed, cement spacer should be removed, irrigation and debridement be repeated. This article describes in detail the stages of preparation of the cement spacer used in two-stage revision surgery.