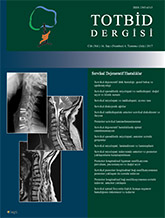 The first papers on cervical fusion are published by Cloward and Smith-Robinson and most of them were cases that resulted with non-union. Cervical anterior plate/screw fixation is first described by Bohler in 1967. Anterior cervical instrumentation is originally used in trauma cases. Due to the apparent benefit of these instruments their utilization has increased in time; especially in multi-level decompression, allograft use, and for cervical degenerative patients who smoke. There are many types of static and dynamic plate system available. Recently, load-carrying anterior systems have also been investigated. Posterior spine fusion results were initially reported for non-degenerative cases. First, in 1891, Hadra reported the wiring method in Pott`s disease. Posterior cervical plaque fixation is relatively a recent technique. It was first used by Roy-Camille and Saillant in 1970 and popularized by Cooper and Cohen in 1988. In this section, instrumentation techniques used in cervical degenerative disc diseases will be mentioned.