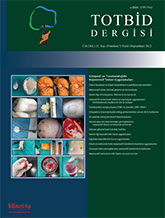 Today, tissue engineers focus on cell-based cartilage tissue repair. With the increasing importance of glycosaminoglycans (GAG), the use of GAG and GAG analogs in cartilage tissue formation and as scaffolds has also increased. Therefore, the use of chitosan, a GAG analog, has gained importance in tissue engineering. Chitosan is the raw material of chitin found in the outer armor of invertebrate arthropods. Chitosan`s injectability, long-term effect with the gel formation it forms in the area where injected, and successful in vivo studies have increased the interest in chitosan. The use of chitosan in cartilage damage has been investigated in in vivo studies that started in the late 1990s and in clinical studies after 2010. When the literature is reviewed, it is observed that the articles about chitosan have increased intensively in the last 20 years, but most of them are experimental studies. Most of the experimental studies have shown histopathologically that when chitosan is applied with subchondral microfracture, it creates a better cartilage repair tissue than microfracture alone and also, creates hyaline-like cartilage tissue. There are clinical studies reporting the results of chitosan application in the treatment of regional cartilage lesions in the hip, knee and ankle joints. In most of these studies, comparisons were made with microfracture alone and better defect filling, more stable cartilage tissue, more homogeneous and closer to natural cartilage tissue in imaging were obtained with chitosan. As a result, chitosan is a biological scaffold that can be used to augment healing with its ability to stabilize the blood clot formed in the microfracture area, whose effectiveness has been proven in vivo and in vitro studies and successful results have been obtained in moderate level studies.